This page explains what Smart Sets are and how to use them.

Smart Sets are an interface for visualizing collections of glyphs in the Font Overview.

They can be selected and edited using the Smart Sets panel.

Smart Sets can be of two different types:

Dynamic sets defined by a query.
Identified by a gear icon.

Smart Sets can be stored in two different places:

Stored in the application defaults.
Available for all open fonts.

Stored in the font lib under a custom key: com.typemytype.robofont.smartSets Available only for this font.

A Smart Set is defined as a list of dicts.

There are multiple ways to edit Smart Sets data:

The attribute names used to build the queries are the same as the names displayed in the Search Glyph panel’s glyph attributes menu, without spaces. 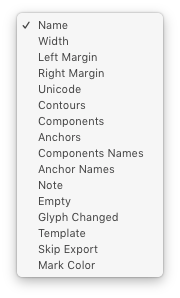 Here is an example query string:

Smart Sets are similar in concept to groups: both represent collections of glyphs.

The table below outlines the main differences between groups and Smart Sets:

To convert a Smart Set into a group, choose Export to a Font Group from the options menu at the bottom left of the Smart Sets panel.