Before we start, it’s a good idea to make a sketch of the designspace we’re going to build:

We’ll be using the MutatorSans family as an example. Its designspace contains: 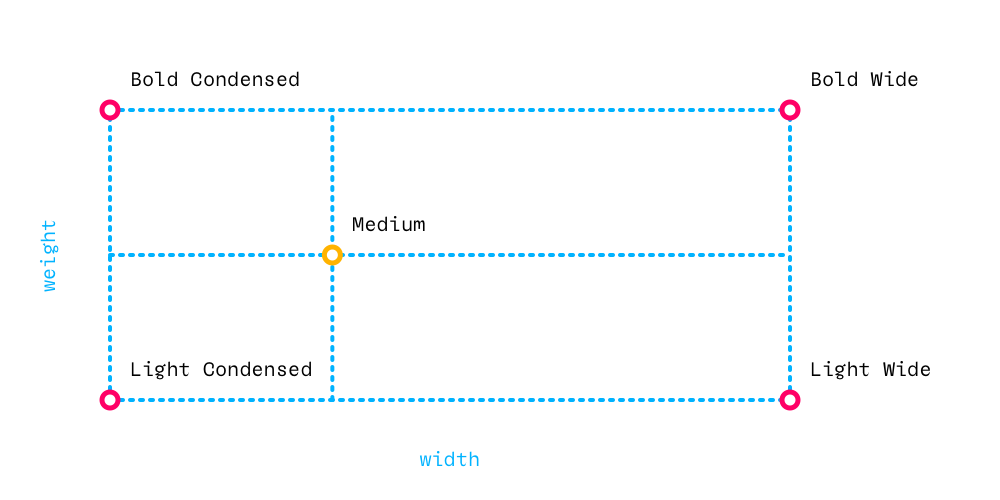 Notice how the interpolation space does not include a Regular master, only extreme styles – this is a design decision. There are other ways to setup a weight/width designspace, give it a try!

Having a blueprint of the designspace, we can now focus on designing the masters.

These are the 4 masters in MutatorSans, each one stored as a separate UFO font.

It’s also possible to store all masters as layers of a single font. If you choose to work this way, keep in mind that these layers do not have their own kerning.

The usual rules and recommendations about drawing for interpolation apply:

Making sure all masters are compatible

Interpolation requires all master fonts to be compatible. This means that:

Older interpolation tools may interpolate a straight segment with a curve by assuming there are off-curve points on top of the on-curves. In variable fonts this is not possible, and it is a good design practice to have all the points in the masters.

The .designspace file is where all information required to build a family of fonts or a variable font is stored.

These are the axes and locations in the example MutatorSans designspace: 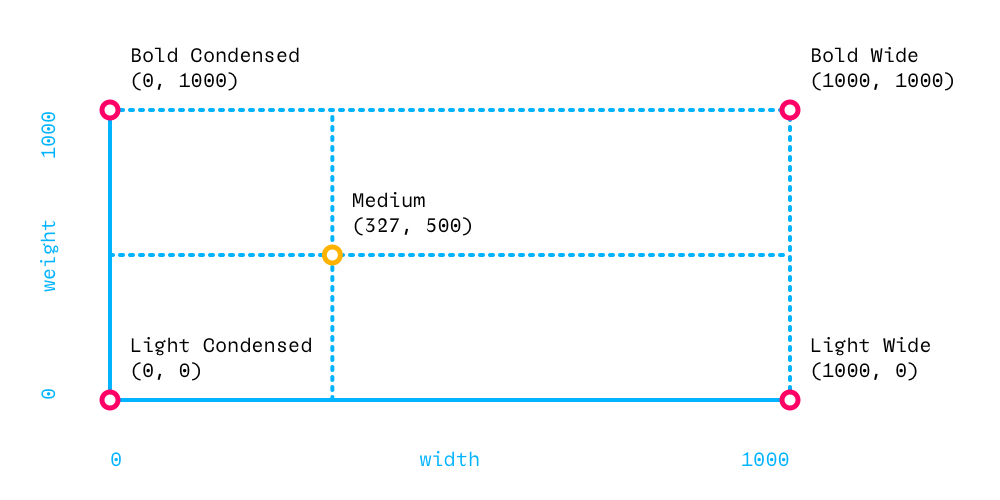 Different tools can be used to create .designspace files:

Interpolation produces continuous variation between masters. Glyph substitution rules allow us to introduce local discontinuous changes to areas of the designspace, switching one set of glyph contours for another.

MutatorSans includes a glyph substitution rule to ‘fold’ the serifs of the I if the width parameter is below a certain value:

The recommended way of building variable fonts in RoboFont is using the Batch extension. Besides generating static fonts, Batch can also generate a variable font from a .designspace file (and a set of compatible UFO sources).

The Batch extension is open-source and can be installed with Mechanic 2.

The requirements for building variable fonts are stricter than those for building static fonts. Batch does a lot of work behind the scenes to fix compatibility issues between the masters. See the Batch documentation for more details.

Use the menu File > Batch to open the Batch window: 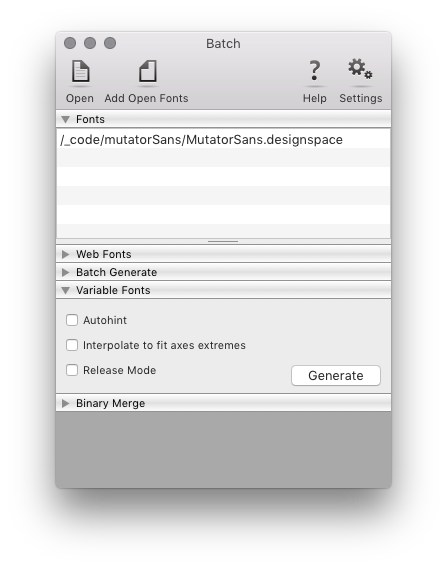 The variable font generator included inside the Batch extension can also be used programmatically: you can import it into your scripts, and use it to generate variable fonts from .designspace files – without opening the Batch window.

The lib folder of every installed extension is added to the sys.path – so code from one extension can be accessed by another extension or by a script.

The example script below generates a variable font from the MutatorSans .designspace file and linked UFO sources.

Variable fonts are supported natively in macOS 10.3 and higher.

DrawBot supports variable fonts too. The following commands are available:

fontVariations(wdth=0.6, wght=0.1, ...)
selects a location in the current variable font using parameters
listFontVariations(fontName=None)
returns a dictionary with variations data for the current font 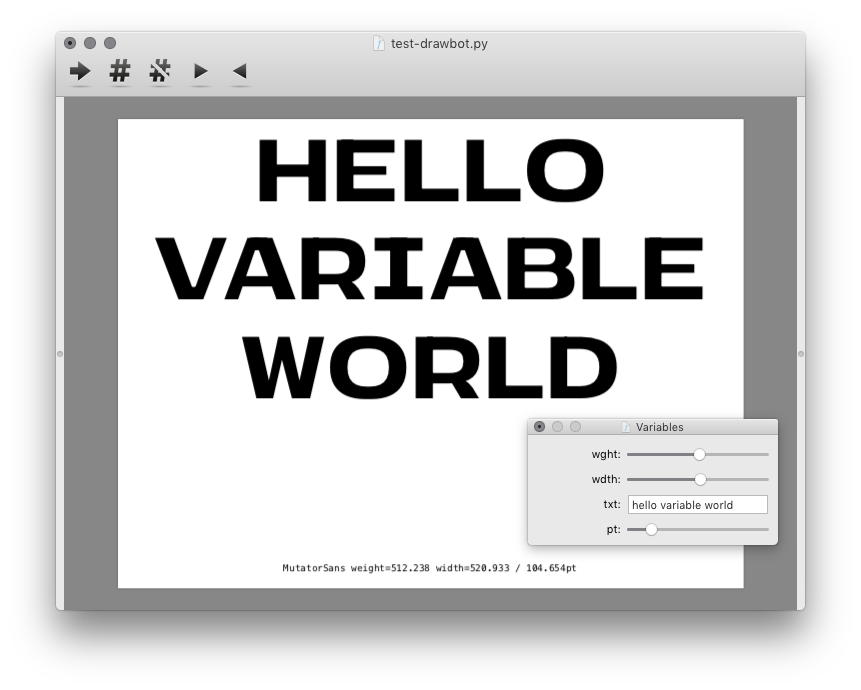 Testing in the browser

Variable fonts are supported in all major browsers.

Use the CSS property font-variation-settings to select an instance in the font’s design space using parameters:

The MutatorSans repository includes a simple HTML test page which shows how to: 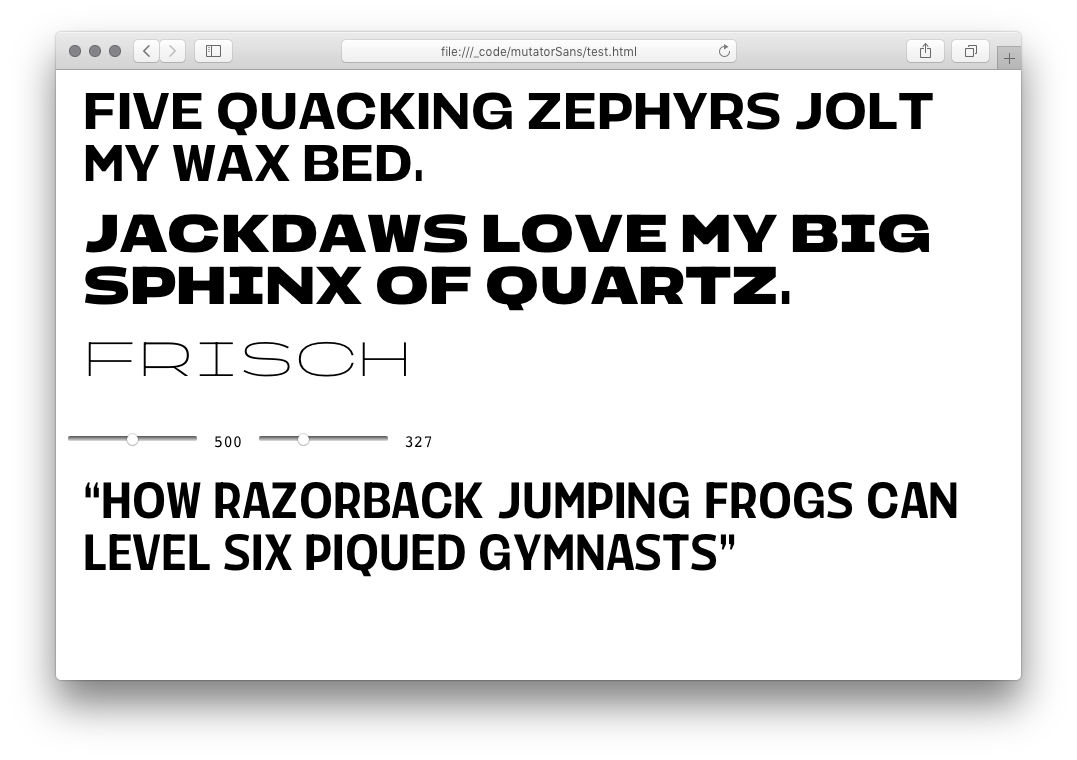